India is the land of traditions, cultures and heritage! Time changes and with it changes lot of things. But what remains behind are the remnants of the bygone era! Over the centuries, Ujjain has been house to a number of magnificent structures, temples, monuments and caves. If are in the holy city of Ujjain do not miss to visit its very famous Bhartrihari caves. Artistically carved the caves are situated near the temple Gadkalika above the bank of river Kshipra and is one of the major tourist spots in Ujjain. Every year thousands of tourists from across the world visit this famous monumental place to witness the art and architecture of the cave. The history of the caves dates back to ancient era when the place was under the rule of King Vikaramaditya. Today Government of Madhya Pradesh looks after the preservation of this architectural master piece of the ancient era. 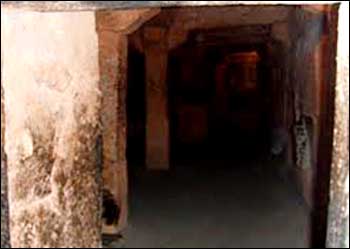 Like other spots of Ujjain, Bhartrihari caves also have a history linked with it. According to legends these caves, assigned to 11th century owe their name from Bhartrihari the step brother of King Vikaramaditya. It is said that when Bhartrihari decided to renounce the worldly life, he came here in search of a peace to continue his meditation. In due course of time these caves became his shelter whwre he spend considerable part of his life. Bhartrihari was a very learned man. He was a great scholar of his time. He also had a good depth and knowledge of poetry. Many of his great works are studied and researched by students and scholars even today. His contribution to the Sanskrit language is immense. Some of his great works like Shringarshatak, Vairagyashatak, and Nitishatak are considered as gems of Indian literature . It is generally believed that all these works were possibly written here only. 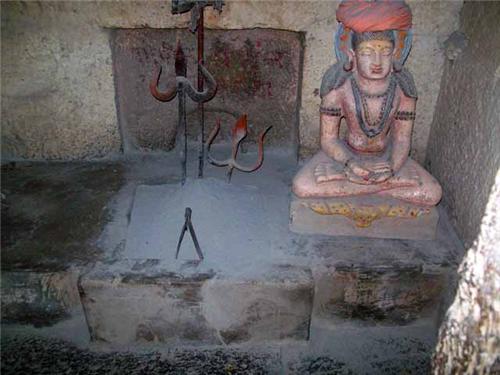 Assigned to 11th century Bhartrihari caves are glaring example of Indian rock-cut architecture. It is fascinating to see how these wonderful creations has stood the test of time and has been lying there for centuries! Located in the middle of beautiful, lush green forest and hilly area the caves are a bit narrower and totally dark and hence, it is suggested to carry the torch with you. Narrow routes inside the cave leads to the place where it is said that Bhartrihari meditated. The stone carved statue of rishi Bhartrihari in the sitting posture is very impressing. Inside the caves you will get to see Mahadeva’s trident and holy ash also called dhuni. It is advised not to touch or temper with any of the things you see there. You can also find beautiful stone images carved on the walls of the caves. The interior of the cave is extremely cool, peaceful, and spiritual. Throughout your journey to Bhartrihari caves you will have a feeling of traveling to a different era. This is more felt once you reach the deepest part of the caves. The surroundings, darkness, serenity of the caves seem to belong to an age completely alien to ours!

There is a large Pipal tree near the cave. It is believed that the holy tree lie above the Samadhi of Rishi Bhartrihari . People visiting the place take its leaves with them and put in the temple of their homes just to ensure peace, prosperity and happiness in the family. Near to Bhartrihari caves lies an ancient temple of Kali Mata.The statue of Kali Mata at this temple is really impressive and hypnotizing. This temple also remains open from 9 am to 5 pm only due to its location in the dense and thick forest.

Things to be kept in mind while visiting Bhartrihari Caves

How to visit Bhartrihari Caves ?

These ancient caves are situated at the distance of around one mile from the city of Ujjain and can be reached by any means of transportation like air, rail, or the bus from any part of the country. You can also hire a taxi from Ujjain to reach this famous cave. The visitors are not allowed to enter this cave before 9 am in the morning and after 5 pm in the evening.