Kaliadeh Palace a beautiful example of Persian architecture in Ujjain was built by the Sultans of Mandu. The 15th Century palace with its central hall surrounding galleries is a classic example of Persian architecture. Two famous Persian inscriptions mentioning about the visit of Akbar and Jahangir testifies to the importance it hold during medieval period. This ancient palace surrounded by water gives a treat to the eyes. Though most of its beauty has faded with time, but still Kaiadeh palace manages to attract tourists by the virtue of its rich past and beautiful locations. 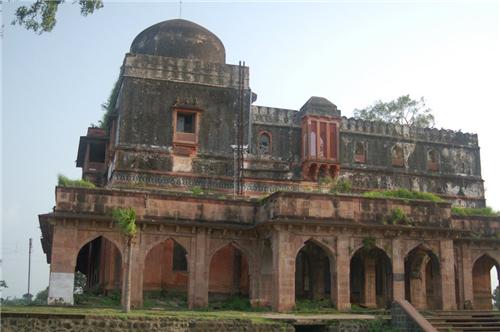 Built in the year 1458 AD, the Kaliadeh Palace has always remained a an important tourist spot in Ujjain. The palace surrounded by lush green gardens is a standing example of rich Persian architectural designs and influences in India. The central hall, which is surrounded with galleries, presents a classic example of Persian architecture. It suffered considerable damage during Pindari raids. However, thanks to Madhav Rao Scindia, the glory of this place was restored in 1920.

Kaliadeh Palace showcases influence of Persian architecture. Even today you can get a glimpse of the Persian culture and their architecture in the walls, ceilings and passages of the palace. The two Persian inscriptions of the palace give the proof of the visit of the famous Mughal Emperors, Akbar and Jahangir.

The famous Surya kund tank is located near to Kaliadeh Palace. The importance of this place can be felt from the fact that people from nearby villages and even from outside visit this place to take bath in one of its tank, which is popularly known by the name of Surya kund. It is considered to be a holy practice to take bath in this place that tends to wash away the ‘sins’. The place is famous for its wonderful water management mechanisms which consist of 52 ponds. The uniqueness of the system is that water first flows clockwise in the first stroke and then anti clockwise in the return stroke. This mechanism can be best witnessed during rainy season when the ponds are full with water. The best time to visit this place is when the rainy season is at its peak. The Shipra River in its full flow provides an enchanting scene when it flows with full throttle around the sides of the palace and through the man made tunnels and channels.

If you are new in this city hiring a cab will be a wise thing to do. You can check the fare details with your hotel and it will be helpful to you if they provide personal cars.
Take a camera with you and capture the remnants of the past and spend a different day with your family. You can carry your tiffin, snacks , tea/coffee with you to add a special touch to your holiday.

Over the years Kaliadeh Palace has become one of the most favourite spots of sightseeing in Ujjain. Families, groups of friends etc flock this place giving it a tag of most famous picnic spots near Ujjain. It is a good place to spend some quality time with your family members far away from the noise and clumsy city environment.Take some snacks and refreshments with you, so that you can have a mini picnic on the banks of Kshipra. Carry a camera to make your visit, a memorable one.