The Land of the Gods, Ujjain has been the source of mythological stories and many unforgettable tales. Even though, the ancient city has many places of interests and attractions still Ram Ghat has its own charm that you will hardly get anywhere else in Ujjain. 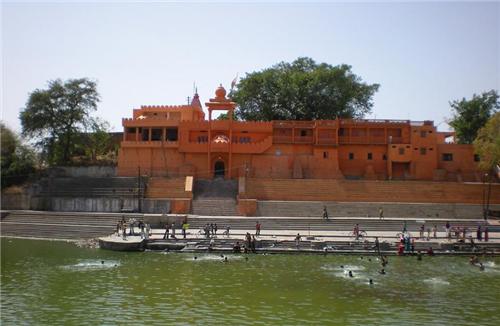 Since ages, Ram Ghat has been one of the most prominent bathing places in Ujjain. After every 12 years, Kumbh Mela is organized and devotees from all over the world flock here to take the holy dip in Kshipra river. During Kumbh, Ram Ghat certainly becomes the most desired places to visit in India. But the significance of Ram Ghat has much more to offer than a bathing place. The magic of Ram Ghat can be felt by sitting there at the evening anytime other than Kumbh.

Most of the city of Ujjain remains crowded due to a huge influx of the tourists. Mahakaleshwar Temple and Kal Bhairava Temple are the busiest in the city. However, Harsidhhi Temple situated beside the holy Shipra River is equally famous and popular. But the rush during the Kumbh becomes almost unmanageable in this temple. Ram Ghat is adjacent to the temple. The evening in the temple is an evening you always look for. Despite being a holy and religious city, Ram Ghat is generally is not much crowded during normal time. However, during the Aarti time, crowd might flock in due to its religious significance. But, the Aarti is something you must watch. The negative energy and the perceptions of the mind go away as the brightness of positivity enters at the Ram Ghat. Taking an appropriate and desirable place at the Ram Ghat may not become a problem, if it can be reached an hour prior to the Aarti.

However, the real treasure of Ram Ghat can be found after the aarti. As the devotees start moving from the Ghat after the Aarti, dark and silence come closer. But it does not mean one become isolated. It is just that you found yourself at a place which is divine, beautiful and at the same time peaceful. The mild light of the Harsidhhi Temple remain visible. The lights of the city fall on the water of Kshipra. The river looks even more beautiful in the evening. It kind of talks to you, it tells you the story of its ancient past in silence.

The incredible experience of Ram Ghat is not so easy to describe, but one thing can be assured that an evening in Ram Ghat can help you to rediscover yourself. It can help to regain your courage, positivity, inspiration and the charm of life. The River Kshipra, divine atmosphere, ambiance of Ujjain and the silence help you to rejuvenate yourself in a completely different manner.